The Chicago marathon was a huge break through for me.  And I feel like I am still processing and reflecting on it.  But I wanted to get my thoughts of the actual race down so I do not miss anything.  There will be another blog with further reflections on the whole season to come as well.  But here we go.

I had the Friday before off work and so tried to relax as best as I could but I found myself very stressed.  And could feel the tension in my neck/shoulders.  But we made it to Chicago later than I would have liked but in one piece.  I had a great sleep than night (*which is key for me because I do not sleep the night before a marathon and my high school coach always told me you compete on your sleep 2 nights before— and I will believe this until my dying day).  I woke up with much less stress than the day before and was really excited to race— phew!

I went for my shakeout/strides/drills/mobility.  Everything felt decent.  I laid down for a bit then we headed to the expo.

When we arrived at the expo (*totally overwhelming but very well organized).  Who do we run in to?  No other than ERIC BANG who was also going for a big break through.  So we nervously walked around the expo together trying to keep each other calm.  We wrote our goals on the break through wall (*can every race have this… apparently there is something to it?!). 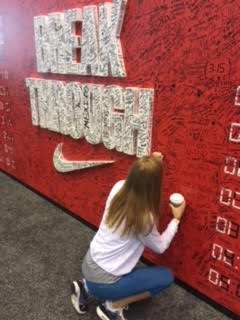 From there we headed to Whole Foods for some carbs (*this is my new go to for day before a race).  Then it was back to the hotel for legs up and movies for the rest of the day.  I also wrote up a race plan and my ‘mantra’ for the race after discussing with Megan Brown (coach).  The big plan for the day was to be intuitive and not to let my watch run me rather just watch my watch.  This is something I have never been good at but now was as best time as any to try.

I went to bed and maybe slept a little but I never worry about this anymore.  I was up at 3:30am.  The hotel we stayed at (Hyatt) was so accommodating for all of the runners they had a market (*with toaster) stay open all night and a shuttle to the start line.

I met Eric and his training partner Kyle at one of the hotels near the start line and we head to the American Development tent together.  Being in the American development was awesome!  We had a tent where we could leave our bags and warm up clothes.  There was a large area to do a warm up run and LOTS of porta potties.  The only down fall was they had us queue to get in to the corral for 35mins and we did not go in to the corral until 7:25am for the 7:30am start.  But it was cool to see the real elites finishing their warm ups and running back/forth to the bathroom.

Okay so race time.  Gun goes off and I feel great.  I am easily running 3:46 and feeling relaxed.  I actually end up getting sucked in a bit (*typical) and running a couple km in the 3:30s (WHOOPS).  I am through 5k at 18:22 –I was supposed to be no faster than 19mins.  But I found myself constantly checking in with myself and confirming I felt good and the effort felt easy.  So I go on with the feeling that “something special was going to happen today”.  But at the same time I also try to actively slow down knowing I am out much faster than I was supposed to be….and it’s a marathon afterall.  I actually had a mild side stitch which I do not usually get during the first 5k but it went away luckily.  I stick around the same pace until 10k

Within the 10k a couple of women pass me making me question my race strategy and have me think of whether I should have gone out slower.  But I hold strong and keep running MY race.  I am through the 10k in 37:14.  Again faster but I am still feeling good and the effort is easy.

Coming up to the half way mark I knew I was waaaaaay ahead of where I was supposed to be (1:20-1:21:30).  So I really tried to slow down around the 19-20k and just relax but there was so much hype and people around it was really hard to slow down.  So I went through the half at 1:19:13 (my PB is 1:18:42— I should probably try another half soon).  My coach told me I had to get to 26k with it feeling easy—so I really just kept concentrated on keeping things easy to 26k.

I ran a big PB through the 30k 1:52:52 (previous PB was 1:56:58).  But knowing how much better of a runner I have become I did not let it phase me and continue to check in on myself and make sure I felt good.  Which I really did.  And I was still holding on to the same pace with ease.

Things got interesting after 35k when it started to become more of a struggle to maintain pace.  I did not feel bad by any means it was just the first ¾ of the race catching up with me, which is fair.  The extra interesting part of this is that author of How Bad Do You Want It? (*which I read this cycle and highly recommend) Matt Fitzgerald past me when the going was getting tough.  Forcing me to ask the questions HOW BAD DO I WANT IT???  It was such an ironic coincidence but it was a great refresh to get me to continue to pushing.  During this time I thought of the people at home watching my dot and rooting for me.  I thought of how hard I had worked.  I thought of myself as being stronger than the fatigue I was feeling.  I also thought of myself at the finish line proud of myself no matter what happened in the last 5k.  These were all new thought processes for me.  In the past when the going gets tough I tend to go to a very negative place, that never helps me to perform.  It was also helpful knowing even if I started running over a minute slower per km I would still break 2:45 it was just a matter of how much.  And it would have been easy to ease up and just hit my goal but I knew I had worked too hard this cycle and too hard in the beginning of the race to not keep pushing as best I could. Of course during this time it had also started to get really hot as well.

In the last mile it was so hard to keep going and when I saw a sign in the distance I thought was the 1k mark I really questioned if I could actually still run one more km…. LUCKILY it ended up being 800m— and that is only 2 laps of a track and I can do that!  So I pushed as best I could knowing that at 400m to go there was a hill.  In the last km my left ear plugged up which was bizarre and has never happen to me so I could not really hear people cheering.  Which was unfortunate because my husband was on that corner.  But I was able to get up the hill and then with 200m to go you get a little down hill push to the finish which was needed.  ESPECIALLY because as I turn the corner I could see the clock said 2:41:** so I knew I had to give EVERYTHING in order to slip under 2:42.  I was able to find just enough to get under… 2:41:58 official / 23rd female overall / 1st Canadian female.

When I crossed the finish line I was overwhelmed with what I had just accomplished at 5mins and 29s PB!!!!  My second thought was “I never want to run again”.  Hahaha

I immediately got asked if I need medical attention which made me feel like I must have looked like I left it all out there which made me really happy because I definitely felt like I had.  It was pretty much the slowest and longest walk of my life back to my bag.  During the walk my left calf cramped twice which has never happened to me.  It is a terrible feeling.

When I finally made it back to the American development tent I saw Eric and heard about his wonderful race which was awesome. 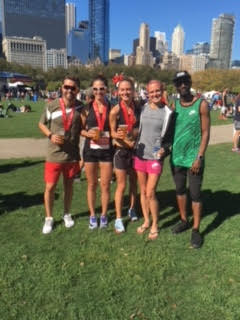 I had the plan of being conservative in the race in order to guarantee myself the sub 2:45.  But as Pre said “To give anything less then your best is to sacrifice the gift.”  As soon as the gun went off I knew I could not hold back.  And I definitely think my race strategy reflected that.  I am so proud of how brave I was during the race and how I was able to trust in my abilities more than I ever have before.  I am working on another blog reflecting on the whole season and what has changed in my training and approach.  So stay tuned for that as well.   But for now I am still getting used to being a 2:41 marathoner!!!

On another side note some positives about this race was being able to take in all four gels and gatorade throughout the race.  In all the other marathons I have raced my GI system has been upset making it hard to push the pace.  I think this is for two reasons decreased overall stress and also taking a probiotic daily (*Thanks Dr. Liz Mingay ND).